Among the projects organised by the Office for Bilingualism and Foreign Languages, there is one to provide Italian subtitles for the film "Verkaufte Heimat", based on a text by South Tyrolean writer Felix Mitterer and filmed in 1989 under the direction of Karin Brandauer (parts 1 and 2) and Gernot Friedel (parts 3 and 4).

The project, which was started in 2005, was created with the objective of permitting a vast public of Italian language citizens to understand the film and delve more deeply into a particularly meaningful and difficult historical period for the local community, favouring better knowledge and understanding among the linguistic groups.

Verkaufte Heimat is perhaps the only film that deals with the historical events in South Tyrol from 1938 to the mid-Sixties. This delicate period is recounted through the history of three families: the Rabensteiners, the Tschutschenthalers and the Oberhollenzers. Set in the Val Venosta, with admirable photography and effective filming, also done in Glorenza and with explicit reference to the reality of Lasa, the film presents the events and family conflicts intertwined with local, national and European history. When the film was introduced, it generated some controversy, but beyond the various points of view, it can definitely be said that not knowing this important work is a shortcoming for anyone who truly wants to understand the fascinating, albeit at times controversial, history of South Tyrol.

Austrian director Karin Brandauer, to whom we owe the first two parts of "Verkaufte Heimat", is the author of films and documentaries, often on historical subjects; she was accustomed to dealing with somewhat "uncomfortable" themes, understood the political and social context of South Tyrol very well and wanted to realise a work that was faithful to the spirit of the text it was based on, a historical narration devoid of partisan ideologies, although it tells the story of a painful time of suffering. The result was a film in which the scenes, albeit tormented and full of pathos, never fall into banal sentimentalism. The director had the sensitivity to get the many local amateur theatrical companies involved in the film, thus overcoming the initial mistrust of the population.

Following Brandauer's death in 1992, the baton was passed to Gernot Friedel, who finished the film transposition of "Verkaufte Heimat".

The subtitles of the first and second part of the documentary were finished in 2007, while the third and fourth part were finished in 2008. The documentary was projected in several places, giving rise to a great deal of interest on the part of the public. The DVD, which is available at the Multilingual Centre of Bolzano, the Multimedia Language Centre in Merano, public and school libraries, is a popular loan request.

The first episode relates a series of events that took place between March 1938 and December 1939.

At that time, the fascist regime was making an ongoing effort to denationalise the South Tyrolese, who reacted with a resistance that was initially hegemony of the parishes and later of the Nazis, starting from the second half of the Thirties. The film relates the events connected with the changing of South Tyrolese surnames, clandestine schools, economic difficulties, the enthusiasm of the South Tyrolese population for the annexation of Austria by the Reich and the conflict with the catholic culture of the growing Nazi sentiment, allied with fascism, and the propaganda for the options, with the contrasts for the opting parties and the Dableiber.

The second episode relates a series of events that took place between March 1940 and December 1945.

Following publication of the results of the options, the success of the Nazi movement grew, along with the contrasts between the opting parties and the Dableiber, the tensions between the Nazis and the catholic culture and anti-Italian actions. Southern families, who were often the poor, unaware victims of Italian fascist propaganda tending to Italianise the territory, moved to the farms left free by the opting parties, who had moved to Eastern countries; they in turn were the poor and unaware victims of German Nazi propaganda tending towards the Germanisation of the territory. The children of the opting parties frequented German language courses once again, in view of their expected departure, postponed due to Italy's entry into the war and by the discomforting news on the conditions suffered by the opting parties, which were considerably different than what was advertised by Nazi propaganda.

The third episode relates a series of events that took place between the end of the Fifties and the summer of 1961.

Following signature of the De Gasperi-Gruber Agreement and emanation of the Statute of Autonomy of 1948, the centralism of the State and Region prevented the true autonomy of the South Tyrolese population, during a period of enormous economic difficulties for agriculture and the mountain farms, leading to the emigration of South Tyrolese to Austria and Germany. At the same time, similar reasons brought thousands of Italians to South Tyrol. The uneasiness of the South Tyrolese population was expressed through a series of political and terrorist actions that culminated in the night of fires of 1961, with scores of attacks.

The fourth episode relates a series of events that took place between the beginning and end of the Sixties.

Following the night of fires in 1961, several Austrian and German neo-Nazis attempted use South Tyrol terrorism instrumentally, which until then had only stricken out against the symbols of the Italian State, without deliberately harming persons. The escalation led to hundreds of attacks, with scores of dead and injured, repression by the State, penal proceedings and heavy sentences. The secret services of several countries moved in the South Tyrol scenario, in a period when independence and anti-colonialist movements were developed on the national level, and movements were created supporting these instances; but there were also movements that called for the exercise of strong power. Diplomacy and politics found an agreement, which called for Provincial autonomy - a disappointment for those who had struggled for self-determination. 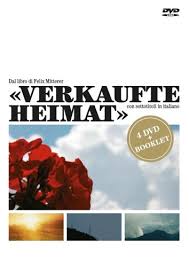 The initial project has been added to with a box set containing the four DVDs of the series, plus a booklet by Prof. Carlo Romeo.  The aim of the booklet is to give the reader, as well as information about the films (authors, plots, and characters), the basic knowledge to set them in an historical background, clarifications as to any inaccuracies or simplifications, as dictated by the logic of narration and fiction, and also a critical outline of problematic points or controversies.